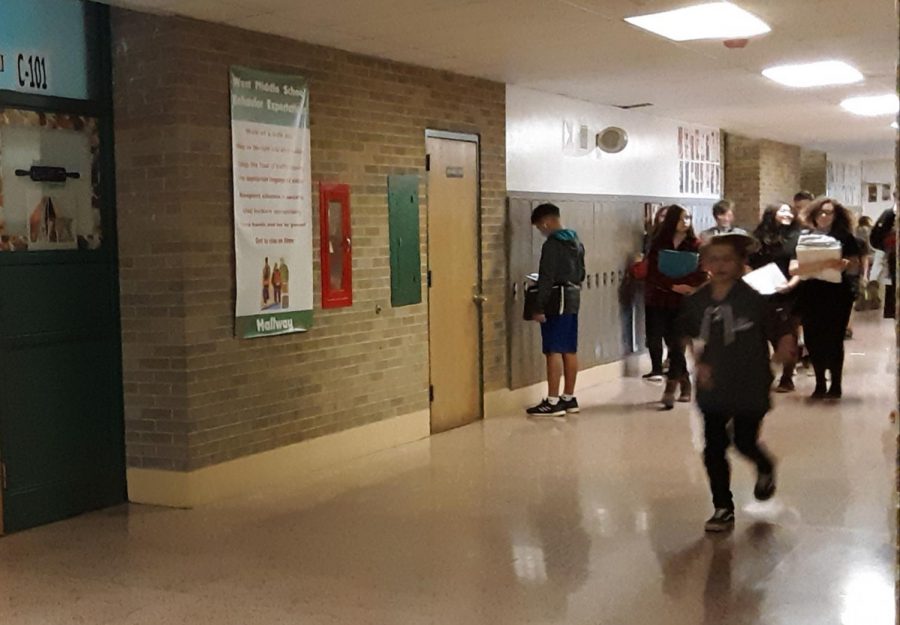 13 seconds left until class starts.  You think you can make it to class before passing time ends, but out of the blue:  WHAM! A large kid slams into you, scattering your stuff all over. Could this scenario really happen?  Unfortunately, it can- and it has to some 7th-grade students at West.

Tardiness is not uncommon at West.  Many students have been reported being “Tardy multiple times”.  Using the bathroom can lead to an immediate tardy. Also, jammed lockers and crowded halls can make you late.

Some classes are a tardiness magnet.  Mr. Watson feels that Mrs. Kozler’s and Mr. Foley’s class “pose a special problem” for seventh graders. Kozler’s and Foley’s rooms are upstairs and the majority of seventh-grade classes are downstairs.  Because of this, it can be difficult to get there on time – but then again, there’s always the West staff! Mrs. Horvath states, “My classroom is far [C-Wing], but kids seem to make and work and are on time.”

If you are struggling with tardiness, here are some tips to help you survive!

Always remember to pre-prepare.  If there is a class you are frequently late in, take your stuff for that class while preparing for the previous one.
Also, West has hall passes.  Whenever there is a legitimate reason you are late, use a hall pass!
And remember to be smart in hallways.  Weave around as much as you if it is crowded- but only if it is crowded.  NEVER run, as this can get you in trouble.

Even more good news: West is taking steps to improve passing time- and some students haven’t been tardy.  Mr. Smiley states that “5 minutes is enough.” Besides Mr. Smiley and other west staff stand in the hallways to prevent collisions.  If you are having any problems, you can talk to a staff member or your counselor. They will gladly help.