The Origin of Pencil Person 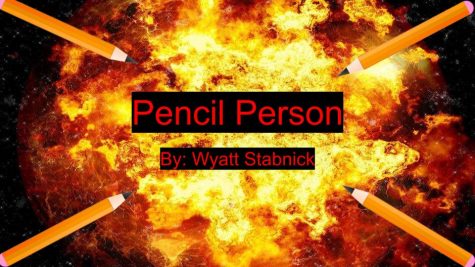 There once was a man that lived in a small Oklahoma town named Shady Crescent. Nothing exciting ever happened there. The town was a mining town that mined graphite. There were some farms but they weren’t big. The only thing that people looked forward to was the annual tree chopping contest. For the past 15 years, Farmer McPleber has been the victor of the contest. Farmer McPleber was so good at chopping trees, he beat the runner up by 10 minutes on average. Deen had always looked up to Farmer McPleber.

Fast forward to present day, and Deen is just getting ready for the contest. He was more excited than scared because he got to meet his idol, but he was scared at the same time thinking, “What if I lost in front of him?” As Deen’s car pulled up to the open, lush field, there was a crowd of people around one certain car, Deen saw the person in the car and rejoiced. The man in the car was Farmer McPleber. It took him a while but Deen managed to get out of his car and walk past his idol trying to act as professionally as possible.

Deen followed the pressed gravel road to the stands where the trees were. Deen practically did a flip, the trees were just like the trees he practiced on, Shaved white birch 3 1/2 feet wide. At this time Deen thought he stood a chance in the contest because Farmer McPleber mainly cut 2-foot Spruce. Then he realized something when Farmer McPleber stationed himself next to deen. Farmer McPleber had an ax mainly used to chop down Birch trees.

“This contest is rigged!” Deen thought to himself, “There’s no way he could have predicted we would be chopping Birch this year!”

Farmer McPleber didn’t seem like a cheater at the time and masked his cheapness with a, “ How diddly do you do?” He cheerfully said to Deen. “Good” Deen responded, trying not to freak out.

“One minute until the contest starts.” Announced the Judges. Deen just stood there waiting and thinking of the angle he was going to chop at then, “Go

Seven and a half minutes later, Farmer McPleber was two-thirds of the way done then shouted timber as he swung the back of the ax of the tree and it started to fall.

Dean didn’t hear Farmer McPleber at the time and kept chopping. Then it all went black the tree and Hit Deen with such force that it launched him into the mines.

Seventeen days later, Deen emerged from his coma in a hospital with several people around him. Deen didn’t know this at the time but this was the birth of PENCIL PERSON.